The hive and its inhabitants

Bees live in a community, and their whole lives are dedicated to looking after the colony. They can only live in groups, and die quickly when they are alone. That is why, since the early 19th century, bee colonies have been referred to as superorganisms and seen as biological units.

The colony is made up of three types of bee:

The queen is the mother of all the bees in the hive. She is bigger than the others, her abdomen is overdeveloped, and she lives longer (4 or 5 years). When they feel the need, the bees choose one (or more) freshly laid egg. They feed it with royal jelly and carefully nurture it. It will produce a young queen who will leave the hive for a nuptial flight, then come back to keep laying eggs until her daughters decide to replace her. The pheromones produced by the queen calm down all the inhabitants of the hive. When these pheromones are weakened or disappear, it will trigger an immediate reaction in the whole colony. The queen is the centre of all attention: fed with royal jelly, cleaned, licked by her court, she is also the main focus for the beekeeper.

The worker bees, or sterile females, form the vast majority of the bees. In the summer, they carry out all the tasks necessary for the smooth running of the colony. Their role changes with their age. In 5 weeks (average life expectancy of a bee), a worker bee will be a cleaner, then nurse, then wax producer, fanning bee, pollen packer, then guard bee, and finally foraging bee. These different roles change their metabolism, but if the colony needs it to, a worker bee can go back to a previous stage, or miss out a stage, always for the good of the colony.

A few hundred males, known as “drones” are in the hive from the end of spring until the beginning of autumn. They come from unfertilised eggs. Their main role is to fertilise the queen, which only happens once in her life. Incapable of feeding themselves, doing any amount of work or defending themselves, they are chased out of the hive when the cold weather is approaching. They are easily recognised by their size, as they are bigger than the worker bees.

In winter, the colony doesn’t hibernate but it does change its behaviour. The hive is now inhabited by the queen and the winter worker bees, born at the end of the summer. Unlike summer bees, winter bees have more fat and live longer (between 5 and 6 months). They allow the group to survive, including in particular the queen, thanks to their ability to produce heat. They huddle around the queen to protect her from the cold. The temperature is kept at around 30°C in the centre of this huddle for the whole winter, regardless of the cold outside. The bees take turns at the centre of the huddle, which means they can stay warm and survive.

The size of the colony varies depending on the seasons, from 10 to 20,000 inhabitants at the end of winter, and up to 80,000 in the middle of the summer, a number which is halved after swarming. The beekeeper, responsible for looking after the bees, will make sure they have the best possible living conditions and the space that they need. He might reduce the size of the hive by adding partitions, or increase it by adding a honey super. 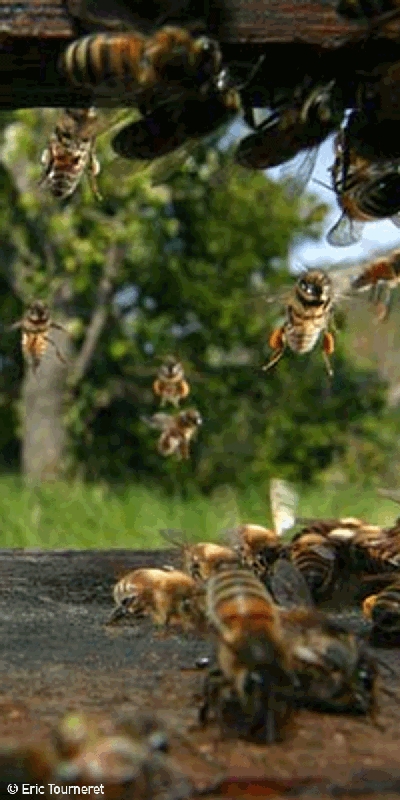